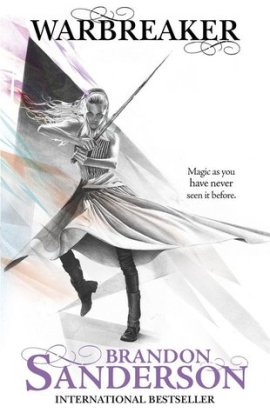 Synopsis
“Warbreaker is the story of two sisters, who happen to be princesses, the God King one of them has to marry, a lesser god, and an immortal trying to undo the mistakes he made hundreds of years ago.
Theirs is a world in which those who die in glory return as gods to live confined to a pantheon in Hallandren’s capital city. A world transformed by BioChromatic magic, a power based on an essence known as breath. Using magic is arduous: breath can only be collected one unit at a time from individual people.
But the rewards are great: by using breath and drawing upon the color in everyday objects, all manner of miracles and mischief can be performed.”

Review
It was time for me to read my first Sanderson novel and I heard that Warbreaker is a good place to start so that’s what I did and I wasn’t disappointed. This is one of his standalone novels based in the same world as many of his other books and series, it gives you a good sense of the world aswell as Sanderson’s writing style without committing to a series.

I was immediately taken in by the main characters, especially Siri and LightSong, even though the book is fairly long it is very action packed and not slow paced at all so I didn’t feel like it dragged. There is a good deal of mystery to the story aswell and Sanderson doesn’t hold back when it comes to being brutal with these characters which was both devastating and refreshing.

I’m glad I finally delved into this world and look forward to re-entering it and starting the Misborn series in the near future.

One thought on “Warbreaker”